Sapphic Musk is a dynamic all-female rock band. Their music pays homage to the tried and true sounds of heavy rock, punk, and power-pop and is complimented by an energetic and humorous live stage show replete with props, lights and fog.

In 2015, Sapphic Musk debuted the heavy rock video and single “Kittenz”, produced by the hard rock power-duo Bob Marlette and Lisa Pimentel. They incorporated their deep fascination with Viking mythology and theatrics and went on to record and release the album “Lady of the Twilight” in the summer of 2017. The album features the “Kittenz” single and the epic Viking-rock homage “Viking Luv”. The band released their holiday classic ”Krampus Bitch” and “2 Bottoms (Don’t Make a Top)” as a double-single on A64A Recordings in December 2017, along with a companion video.

Since forming Sapphic Musk has built a steady local following of enthusiastic fans. The band toured Europe in 2018 and is currently playing shows around the United States and Canada. 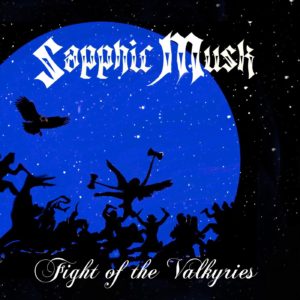