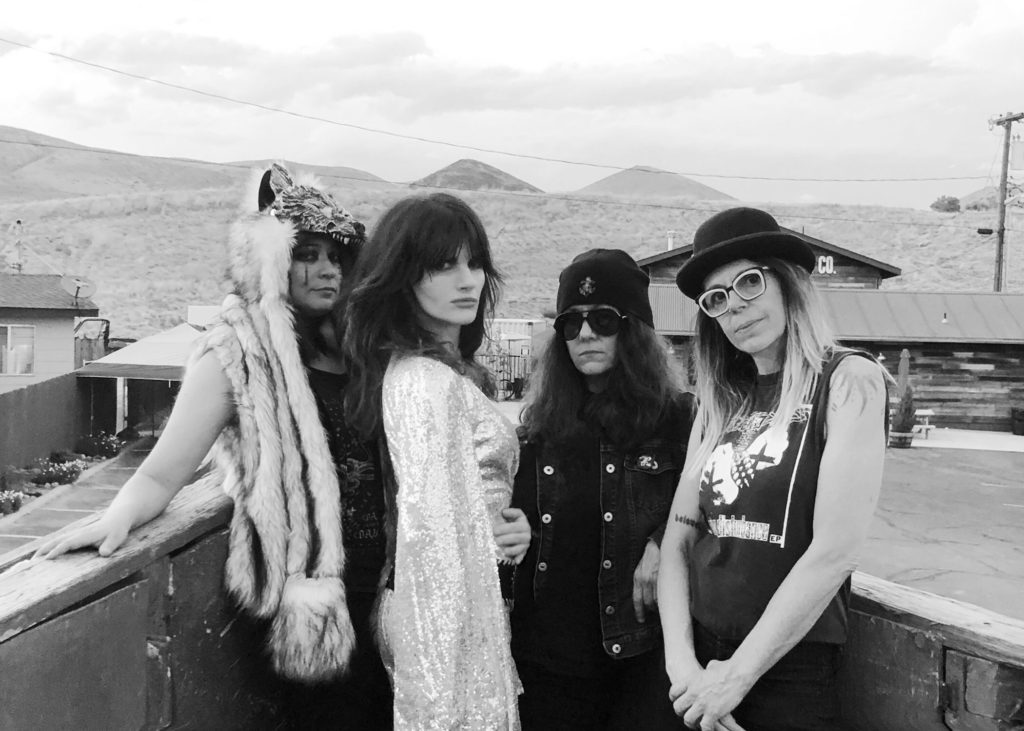 ​ARTISTS IN THE SPOTLIGHT

Forges in the fires of Valhalla, brought forth by Oden to do his bidding amongst us mere mortals, Viking Metal warriors Sapphic Musk have been busy slaying dragons across the continent on their recent Running From America European tour.  While Alice In Chains may singabout snuffing roosters, Sapphic Musk is actually slaying dragons on stage. I kid you not.

As the band started to crank out the first chords of “Invocation of the Musk”, there was one glaring omission from the line-up: lead singer Sara T. Russell.  What the hell?  Were they going to kick off the show with an instrumental?  That would be odd, since the band isn’t known for instrumentals. Maybe she had too much cotton candy at Tivoli the day before, was paying the price and wouldn’t be making it at all.  As I wondered how the band was going to pull off the show without their frontwoman and lead singer, I caught movement out of the corner of my eye, turned, and, donning antlers and a long black cloak, Sara entered from stage left.  As she stepped up to the microphone and said hello to the crowd she let the cloak fall to the ground, revealing a silver jumpsuit.  Lifting her arms out to her side she unfurled a set of life-sized golden wings.  The crowd let out a rancorous cheer as I ducked, just in case she started to fly (Underwerket is a basement venue with a very low ceiling). She didn’t fly.

Feeling a bit foolish, I stood back up as the band began “Power Suits”, a catchy power pop song that really got the crowd going, before moving on to “Oh Sally” and “You Need Me” (one of my personal favorites).  Sapphic Muskwent on to play four more songs before things got really crazy.  As the band laid down the first chords of “Viking Luv”—a homage to Vikings everywhere—a six-foot tall dragon named “Wendy” started to inflate on stage (“Wendy” is a baby dragon, measuring only about 6 feet tall; the larger 11-foot-tall mother dragon had to stay at home in LA for practical reasons). Sara, armed with a shield and battle-axe, took “Wendy” on in a life or death battle.  Luckily for us, Sara prevailed, and the show could go on.

Sapphic Musk closed out the show with “Go STR8 Back” (a humorous poke at straight girls) and the song we had been waiting for all night: “Kittenz”. “Kittenz” is a hilariously funny song about, well, kittens. Standing at her microphone, Sara held three kittens in her hands that, among other things, sang the chorus to the song: “Meow, meow, meow, meow, meow…”.  I should probably stress that no animals were injured during their performance.  Except, of course, “Wendy” the dragon and the three kittens that ended up being kicked about the stage.

Sapphic Musk wanted to say good night after “Kittenz”, but the crowd wasn’t quite ready to let them go.  As an encore they played “2 Bottoms (Don’t Make a top)”.

It’s clear that the band stresses the art of performance, wanting the audience to have more than just a musical experience.  And their funny. And the audience ate it up.  They’re like the female version of Spinal Tap, only sexier. I mean, come on, what’s not to like about lead singer Sara T. Russell?  Sara may be small in stature, but she is larger-than-life on stage, her energy is contagious and her antics humorous.  Interestingly, for all of that high-energy craziness she displays on stage, in person she is sweet, soft spoken and even a bit shy (or maybe I just scare her? I do have that effect on people). Although Sapphic Musk takes a comical, theatrical approach to their music, make no mistake about it, these ladies can play, and they’re damn good.

If you missed their show this time around don’t worry, Sara promised me that they’d be back.  Keep an eye out for upcoming European shows in 2019 or, if you’re in the US, the remainder of 2018.  You can, of course, find their music on all the regular streaming services and see their videos on YouTube.

Since we’re all friends here, I’m going to let you in on a little secret.  You see, I have a bit of a crush on Sara (but please don’t tell her…it could be a bit embarrassing). It’s the kind of thing that sappy rock ballads are written about:

Won’t you be a high for me?
Take my hand and fly with me
Don’t want you to cry for me at all
Would you sing your song to me?
Tell me you belong with me
Tell me it’s okay for me to fall

Sadly, it’s a love that can never be (the band is named Sapphic Musk for a reason).  Oh well, I’ll get over it…eventually. – K. Hillyard

LA WEEKLY – Best of L.A. 2018:
Best Viking Metal Band
There’s a reason that Sapphic Musk are the best metal band in Los Angeles. Yes, I realize that we’re tacking on the qualifiers like “Viking.” Sapphic Musk transcend all that. In terms of pure power and sterling theatricality, this quartet of hard-rockin’ wimmin — led by sonic sorcerer Sara T. Russell — present heavy metal in the way that, as Lemmy Kilmister, once put it: “People don’t want to see the guy next door on the stage; they want to see a being from another planet.” While most metal has become either lethally careerist or charmlessly calculated, Sapphic Musk’s music is at once imaginative, joyous and hard. And when Russell storms the stage, puts on her crown of antlers, girds her loins in a skintight black catsuit and spreads her massive golden wings wide, you know that she’s a star, she’s a star, she’s a star. – David Cotner

DECIBEL MAGAZINE
If you’ve been paying any attention whatsoever to this magazine over the past 100+ issues, you know the Decibel staff unconditionally loves the shit out of two things: metal and cats. So, you can imagine how quickly our blackened hearts went tits over tails when we discovered the new video “Kittenz” by Sapphic Musk… We have absolutely had this dream: Kittens crowd surfing. Kittens in teeny tiny horned helmets. Kittens rocking out in the front row. Kittens detonating a bomb on stage. Kittens fucking up the band’s dressing room. Bonus: The Sabbath-y song itself is pretty freakin’ killer. – Jeanne Fury

AMOEBLOG
“Kittenz,” produced by Bob Marlette (Rob Zombie, Black Sabbath, Alice Cooper), boasts heavy guitar riffs over big tight drums. It’s the stuff that turns mosh pits into raging tornadoes! Tastefully produced and perfectly executed, the single definitely stands on its own. Just when you thought it couldn’t get any better, the ladies of Sapphic Musk drop a gem of a video to accompany their feline fantasy. – Amoebite 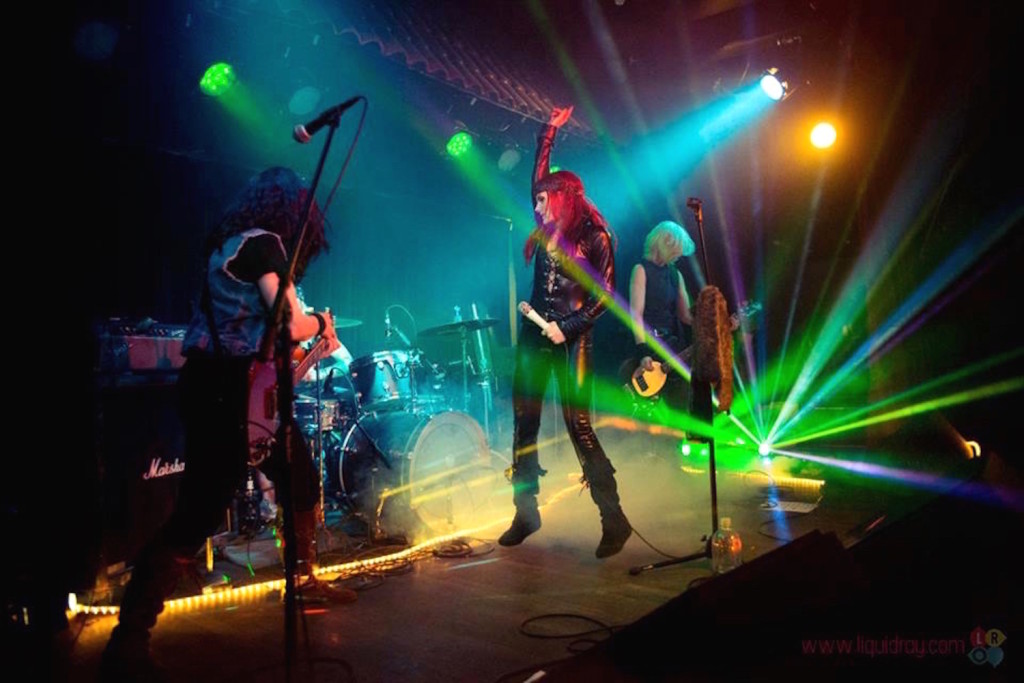 LOS ANGELES MAGAZINE
[Sapphic Musk’s] music and live shows are seriously entertaining. The band consists of well-known local musicians who earned their chops playing in other popular bands from years past. Parody rock and roll is a dying breed; here’s a chance to experience the best the genre has to offer.

AUTOSTRADDLE
Fans of heavy metal and tiny kittens alike will rejoice in this amazing new video from Sapphic Musk… Their thunderous new track “KITTENZ” was produced by Bob Marlette (Rob Zombie, Black Sabbath, Alice Cooper) and sounds like… well, like Black Sabbath if they were obsessed with cats.

L.A. BEAT MAGAZINE
“Nordic” punk metal rockers Sapphic Musk occupied El Cid Restaurant on Saturday night, much to the delight of the crowd (sapphic inclinations or not) who welcomed the invaders with open arms. Sapphic Musk is comprised of veteran LA rockers… Among those in the crowd who were eye-and-ear witness to the one hour adrenalin-inducing rock occupation were Carole Pope (Rouge Trade), Chris Freeman (Pansy Division, GayC/DC) and bandmate Brian Welch (GayC/DC). Sapphic Musk have promised to “return” to America soon – from the crowd’s reaction this will be a re-occupation they look forward to!